Spin Master (TSX:TOY) and Birchcliff Energy (TSX:BIR) were some of the top-performing TSX stocks yesterday, appreciating 10% and 8%, respectively, higher. Is more upside coming?

First of all, it’s important to note that both stocks were severely punished during the March market crash that was triggered by the novel coronavirus pandemic. 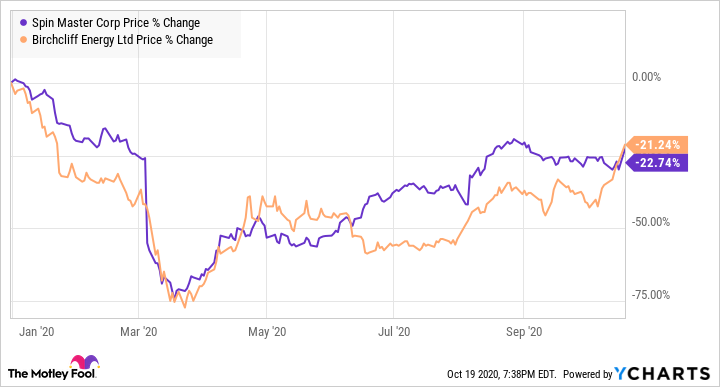 Spin Master is a children’s entertainment company with a diversified portfolio of toys, games, entertainment properties, and digital apps.

The stock has recovered a fair amount from the crash — a triple from the bottom. It tends to experience seasonal strength through late November in anticipation of the upcoming holiday sale. This may be why there has been renewed interest in the stock with a high-volume pop yesterday. If it follows its usual trend,  the stock can head higher over the next month.

Longer term, there’s more to be excited about the company as well. Spin Master, in association with Nickelodeon Movies and Paramount Pictures, is producing an animated movie for its popular entertainment franchise, PAW Patrol, which is scheduled to appear in theatres next year on August 20. Currently, the award-winning preschool series airs in 30 languages, in more than 160 countries.

Spin Master has a current ratio of 1.4 times to meet its short-term obligations over the next year. It also has a healthy Altman Z-score of 3.6, which suggests the company has a solid financial position.

Patient investors might consider Spin Master, which can appreciate another 50% to return to its normalized levels over the next couple of years.

Can this energy stock burst higher?

As commodity prices are lower, its production levels are expected to be roughly flat this year with marginal growth of about 1.3% against 2019 based on the company’s midpoint estimate.

The energy stock tends to experience seasonal strength going into the winter months, in anticipation of greater gas usage.

Analysts have an average 12-month price target of $2.53 per share on the stock, which represents near-term upside potential of 24%.

Birchcliff believes that the fair value of the stock is $6.15 per share. This means the energy stock can potentially triple from current levels over the longer term.

Bonterra Energy Stock Has Doubled: Is There More Upside in 2022?

It's been one of the best-performing TSX small-cap energy stocks in 2022, yet shares are cheap today.

TSX energy stocks at large have beat broader markets this year. But that's nothing compared to these small caps.

Dividend stocks like Enridge (TSX:ENB)(NYSE:ENB) could boost payouts this year.

Income Investors: 3 Energy Stocks That Yield up to 6%

Greenlane Renewables Stock Could 3x Your Money, but Buyer Beware

Will investors take renewed interest in the renewable natural gas company as an ESG investment?